Ruth Mountain, believed to be a remnant of an ancient volcano, is a straightforward climb via a moderate glacier to a high summit at the edge of the most rugged portion of the North Cascades.

It's panoramic scenery of open meadows and wild flowers are reminiscent of the Alps and it is truly a gem of the northwest. Its summit provides breathtaking 365 degree views of 100's of glaciated peaks in the North Cascades and even as far as the Canadian Rockies.  Just to name a few, views can be seen of the Picket Range, Mount Baker, and Mount Shuksan, one of the most frequently photographed mountain in the northwest, (in fact you've probably seen it in a waiting room or two). The view of Mt Shuksan's east face from Ruth's summit provides a humbling perspective, peering up at several “hanging glaciers” and Sulphide Creek Falls, one of the tallest waterfalls in North America, crashing over 2200’ to the valley floor below. Avalanches and ice falls can even be

seen and heard year round cascading off of Shuksan's East Face, making Ruth Mountain the perfect safe vantage point to witness both the power and beauty of the northwest.

Mount Daniel is the highest point of both King County and Kittitas County. Located in the heart of the Alpine Lakes Wilderness in Washington's Central Cascades, Daniel is composed of five “summits”, the highest of which is "West (true) Summit." Situated directly on the Cascade Crest, Daniel is also the highest point in the Stevens-Snoqualmie Pass area of the cascades and as such, draws in more precipitation than any other peak in that area. The direct impact of that is Mount Daniels relatively significant network of small glaciers. The Lynch Glacier cloaks the mountain on

the north and drains into the East Fork Foss River and the Daniel Glacier on the NE side drains to the Cle Elum River. These glaciers also feed a multitude of emerald-colors alpine lakes. This scenic and picturesque atmosphere is further added to by the landscape-dominating view of Mt Stuart, seemingly watching over the Alpine Lakes Wilderness like the fortress that she is, and making Mount Daniel the perfect place to take it all in. 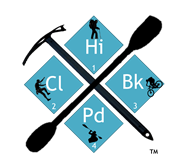 Mount Gilbert is the highest point in the Goat Rocks and aside from its nearest lofty volcanic neighbors, is the highest peak in Washington's southern Cascades. It is Believed that Gilbert, along

with  the rest of the Goat Rock peaks were all park of an ancient strato-volcant that was likely over 10,000 feet tall. Since then its glaciers and violent volcanic activity have eroded much of it away  into what are now several smaller peaks of the Goat Rocks Wilderness. Its Centralized location between Mt. Rainier, Mt. Adams and Mt. St Helen's make it the perfect vantage point for some  spectacular scenery!  Covering everything from the massive spans of wildflower clad meadows, exposed craggy summits and the torn up jaws of the Conrad and Meade Glaciers, this diverse  landscape has it all. Gilbert is even home to over a hundred wild mountain goats!

Mount Olympus, named in reference to Greek mythology as “the home of the gods”, is the tallest and most prominent peak on the Olympic Peninsula, and is widely considered the “crown jewel” of the Olympic mountain range. It is the highest point in Jefferson County and the 3rd most isolated peak in Washington State. Few people
ever even see Mount Olympus due to its isolation and centralized position amongst the surrounding Olympic Mountains. The peak maintains 6 active glaciers and as one
of the most technically difficult “county high points” in the lower 48, it is considered an “Apex Peak.” http://www.peakbagger.com/list.aspx?lid=821​. Every year it is
attempted by many climbing parties. However, since it is so remote, it requires a long and difficult approach, and (as is true for most glaciated peaks in the northwest),
the weather conditions both on the approach and high on the mountain can change quickly and frequently. This consequently makes summit attempts and pre-planning
for such attempts difficult and the average success rate is quite low. ​Being the undertaking it is, a successful summit of Mount Olympus is considered a significant accomplishment among the climbing community and subsequently this peak winds up on many climbers’ “bucket list”.
View on Mobile